Mayor Curry: ‘Vendetta over vision’ led to failure of Lot... 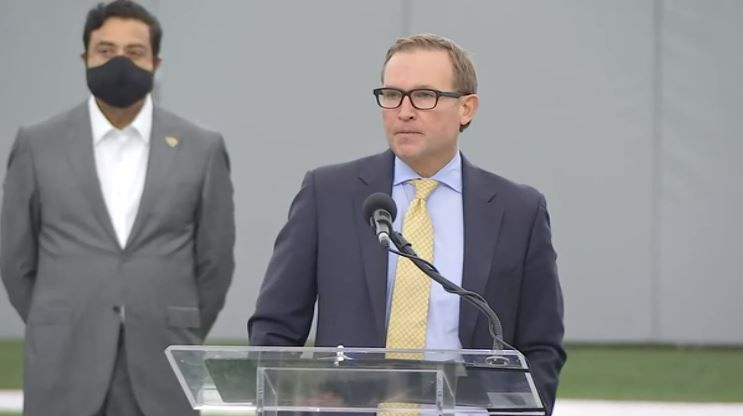 JACKSONVILLE, Fla. – Hours after Jacksonville City Council voted down a proposed deal to build a major entertainment complex in the shadow of the Jacksonville Jaguars’ stadium, Mayor Lenny Curry said personal vendettas against him and his administration were to blame.

“You had vendetta over vision last night,” Curry said Wednesday morning on 1010XL sports radio. “You did have council members with personal beef with me that voted no. You have one that told the organization as recently as yesterday that he was a yes, and then he went no.”

Curry appeared to be referencing his ongoing public beef with Councilman Garrett Dennis.

Dennis was one of three council members, including Joyce Morgan and Randy DeFoor, who voted last week to advance the project out of committee and bring it to a full council vote only to vote against the development on Tuesday night, surprising some.

Council members Danny Becton, Matt Carlucci, Al Ferraro and Council President Tommy Hazouri also voted against the deal which fell 12-7. A minimum of 13 votes were needed to approve the project.

“How are we going to move forward when you have people casting votes because they want to be mayor, or they want to run for office for the next 10 or 15 years, or they have personal vendettas against me,” Curry said. “We’re gonna have to figure out how to navigate that, or this city is going nowhere, downtown that is.”

News4Jax asked for an interview with Curry about Lot J but as of 12 p.m., there had been no response.

During an interview with The Morning Show on Wednesday, Dennis placed the failure of the deal squarely at the feet of Curry.

“I think there’s gonna have to be an olive branch extended on both sides, but this deal fell apart because of the mayor, no one else,” Dennis said. “I mean he negotiated a bad deal and he brought it to the council. And so we had to act in the best interest of the taxpayers. And so I don’t regret my vote, and I don’t think the other six who voted against this deal regret their vote.”

Dennis said he supported the idea of developing Lot J but said the deal was bad from the start — that it was cloaked in secrecy, rushed and that it “screwed” taxpayers. He and other council members have also drawn comparisons between Lot J and the scuttled attempted sale of JEA.

“Council members said that this was negotiated in secrecy. That’s a bunch of baloney,” Curry said. “The executive branch negotiates deals and they bring deals to the City Council to debate. If you follow their logic that you have to negotiate deals in public, we will never bring another company or job expansion to our city.”

When asked if he was concerned that voting down the deal would lead to Shad Khan and the Jaguars leaving the city, Dennis said that is always on the table.

“What does that say about the Jaguars? One field, one particular development is their deciding factor to leave the city?” Dennis said. “But again, I do not think this one deal will be indicative if they’re leaving or not.”

“We’ll go through the process for the Shipyards which will go through [the Downtown Investment Authority] and then we’ll see how that goes,” Lamping said Tuesday night.

“Mr. Lamping started talking about the Shipyards when, you know, the big elephant in the room is the stadium,” Dennis said. “[Lamping] said on the record about a month ago that in 2023, they will be coming back to the city to talk about renovating or either (building a) brand new stadium before they will talk about extending their lease. So, in my opinion, I think we need to deal with the stadium before dealing with the Shipyards or any other development.”