Jaguars fans say, ‘I do,’ to Trevor Lawrence’s wedding registry 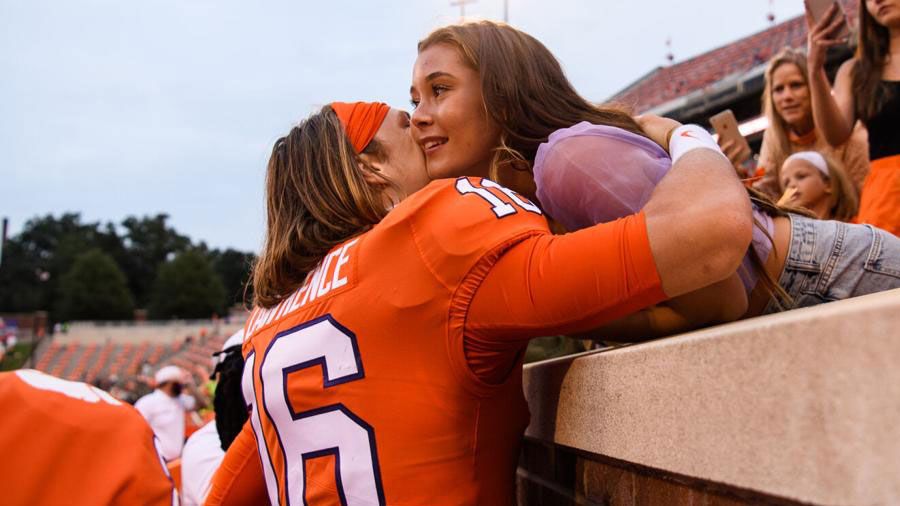 JACKSONVILLE, Fla. – Only weeks before Clemson University quarterback Trevor Lawrence is likely to be drafted by the Jaguars with their No. 1 overall pick, he had another big day.

On Saturday he married his longtime girlfriend, Marissa Mowry.

The wedding at Palmetto Bluff, a luxury resort community in Bluffton, S.C., was attended not only by the family and friends of the happy couple, but the entire Clemson coaching staff and several current and past teammates, according to Clemson Insider.

Jaguars fans didn’t get an invite to the wedding, but they are making sure Lawrence knows they wish they could be there by pooling money to buy him a wedding present.

The campaign is being led by Eric Dillard, or @E_Dilla on social media, a well-known figure in the Jaguars Twitterverse. On Friday, Dillard tweeted a picture of Lawrence and Marissa Mowry’s wedding registry. After it was jokingly suggested that fans should collect money to buy him a toaster, the campaign took off.

“The community in general is much greater than Jacksonville, the term Duval is much greater than the county. It’s everyone who is in twine with the team. And that’s really all that matters,” Dillard said. “If you’re Duval if you’re a part of our community, and you want to give, if you just want to be you, you are welcome to come and join us. It is a great time and I thank everyone who has done it so far.”

If everyone wants to hit my Venmo (same as my @) we can buy them one of the sick gifts on their registry we a welcome to Duval. https://t.co/0QOJN8IsIK

Donations quickly poured into Dillard’s Venmo account. Soon, Jaguars Twitter surpassed the $300 goal. The plan was to accept donations until 8 p.m. on Friday night then hold a poll to decide what gift to purchase.

The Lawrence gift fund surpassed over $3,000 by 6 p.m. That sort of cash could buy any item on the registry list.

Local attorney John Phillips even swooped in and purchased the toaster for the couple sending it from #Duuuval.

By Monday morning, more than $7,500 had been raised for the Lawrence’s Wedding Registry Fund and the Jaguars Twitter base came up with a great idea. Instead of using the entire sum to buy gifts from the registry, they will purchase a gift for the couple and the rest will be donated to a charity that Lawrence supports.

“I was like kind of shocked that people wanted to donate straight through my Venmo account because it’s kind of weird … but I guess thinking about the things we have done in the past the $300 did seem like a very reasonable amount to get to,” Dillard said. “So, it is pretty awesome that it happened so quickly.”

If the donation surge seems unusual, it isn’t.

Earlier this year, Dillard made a social media post about a local elementary school needing book donations during literacy week. Guest readers weren’t permitted to come to the school, bring books and read to classes due to pandemic restrictions, so a teacher there asked the public for help.

Dilliard put that message out on Twitter and social media responded. Brookview Elementary initially asked for 24 books. When literacy week began, students were told that they would be able to pick out two books each to keep. There were more than 1,400 books purchased and donated to the school within a week’s time.

I’ll be honest, I knew y’all were wild but I didn’t think y’all were this wild. What if we buy the toaster, maybe another item or two on the list and then donate the rest of the money to a charity that TLaw supports? And we keep donating to the cause?

Currently, the only charity directly attached to Lawrence and Mowry is their COVID-19 relief fund.